If you have been tracking the torturous workings of the infrastructure bills working their way through Congress, consideration is now being given to a “billionaire” tax, focused on a extraordinarily small subset of Americans, and intended to raise tens, perhaps even hundreds, of billions of dollars in revenues, to cover the costs of the bill. I am constantly amazed by the capacity of legislatures to write bad tax law, but this one takes the cake as perhaps the worst thought-through and most ineffective attempt ever, at rewriting tax code. That is a little unfair, I know, because the details are still being hashed out, and it is conceivable that the final version will be redeemable, but given that the clock is ticking, I am not hopeful!

The Billionaire Tax: History and Proposal

To get a sense of why we are discussing a billionaire tax, you have to start with a historical context, beginning with a recognition of increasing wealth inequality and the perception (real or otherwise) that the wealthiest were not paying their fair share of taxes, continuing with promises made during  the most recent presidential campaign and culminating in the last few months of legislative slogging to get a passable bill.

The Rise of Populism

For much of this century, the big story in economics and politics has been increasing inequality, with the spread in income and wealth between the richest and the rest of society widening over time. The graph below, from the Pew Research Center, is a good starting point, since it highlight the shift in the share of aggregate US income flowing to upper, middle and lower income households.

While economists and politicians continue to debate the causes and consequences of this inequality, that income inequality is magnified when you look at the wealth levels different income groups, with the lowest income households falling even further behind. A rising stock market has augmented the wealth inequality, since the wealthiest hold the preponderance of equities in the market.

In conjunction with this widening inequality, the perception is building that the wealthy don’t pay their fair share in taxes, even though the question of whether they are depends upon the prism you look through. If you focus just on federal tax dollars paid by each group, the wealthy are actually paying a larger share of federal taxes collected than ever before in history, undercutting the claim that they are welching on their tax responsibilities. 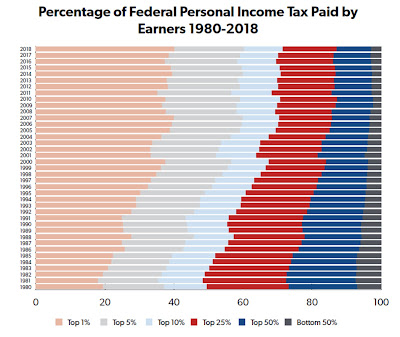 The pushback from progressives is that this graph misses key components, including other taxes collected by the government (payroll taxes, Medicare taxes, estate taxes etc.), and that it is the tax rate that is paid, not dollar taxes, that better measures fairness. In 2018, for instance, the federal effective tax rates paid by different income groups were as follows: 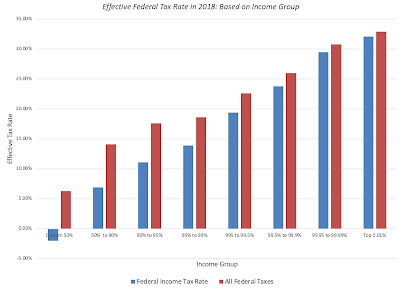 To understand why the billionaire tax proposal has become one of the center pieces of the revenue side of the infrastructure bill, we have to retrace the path taken during the 2020 presidential election. During the presidential campaign, President Biden promised repeatedly that he would not raise taxes on anyone making less than $400,000 a year in income, effectively locking out 98.2% of income tax payers from any proposed tax increase. In conjunction, he also argued that the top 1.8% of the populace were not paying their fair share of taxes, and that corporations were also paying too little, and that any rewrite of the tax code would force them to pay their “fair share”. In keeping with these two promises, the version of the big infrastructure bills that was initially promoted by the administration raised a significant portion of revenues from changes in tax rates for the wealthiest individuals (by raising the marginal tax rate from 37% to 39.6% for those in the $400,000 plus income range and by adding a surtax on capital gains for those making more than a million dollars in income) and by raising corporate tax rates from 21% to 28%.  After months of back and forth between members, the House Ways and Means Committee approved tax provisions on September 15 that included many of these proposals, raising the corporate tax rate from 21% to 26.5%, while putting limits on interest tax deductions, and the individual tax rate to 39.6% (for income) and 25% (for capital gains).

The proposals to raise revenues, from the While House and the House committee ran aground, because of objections on raising tax rates from Senator Sinema last week, leading to a rethink of the revenue side.  As higher tax rates were taken off the table, the congressional committees had to look elsewhere, and the billionaire tax proposal seems to be gaining traction, as the replacement. Since almost everything we know about the proposals comes from unofficial sources or news leaks, and talks are still continuing, everything could change in the next couple of days, but here is what the proposals look like on Monday, October 25:

In conjunction, corporations will also face a corporate minimum tax rate, putting a floor (at least in theory) on how low they can make their effective tax rates. I will leave it others to discuss that aspect of the tax code, which at least has a defensible basis, but I find the billionaire tax to be problematic at multiple levels.

The Worst Tax Code Change Ever

As I noted earlier, there may be changes that happen between now and when this gets voted on that help make it better, but as it stands, this is an extraordinarily bad tax proposal, and for many reasons:

If the history of tax law is that there are always unintended consequences, the problem with this law is that the consequences are entirely predictable and mostly bad, and you and I, even though we are not in the billionaire club, will face them.

For those who view the tax code as an instrument to deliver pain, the only consolation prize will be that punishment is being meted out to those who “deserve” it the most, but I am afraid that it is a booby prize. With the billionaire tax, the intended targets will pay far less in taxes than you think they should and now that the door to unrealized profits being taxed has been opened, how do you know that you are not next on the target list?

I understand that those working on these tax code changes face a tough task, given the constraints that they have on them (not raising tax rates, not taxing people who make less than $400,000), but these are constraints that they imposed on themselves, either because too much was promised on campaign trails or because they are working with paper-thin majorities, where one hold out can stop the process. The problem with the billionaire taxes is that it will be ineffective at collecting tax revenues, and I am willing to wager that a decade from now, we will find that it collected only a small fraction of its promised revenues. Good intentions about creating a better social safety net cannot excuse the writing of tax laws that are inefficient at collecting revenues, ineffective even in their punitive intent and potentially dangerous for the rest of us, in terms of side costs.