There are three topics that you can write or talk about that are almost guaranteed to draw a audience, stocks (because greed drives us all), sex (no reason needed) and salvation. I am not an expert on the latter two, and I am not sure that I have that much that is original to say about the first. That said,  in my niche, which is valuation, many start with the presumption that almost every topic you pick is boring. Obviously, I do not believe that, but there are some topics in valuation that are tough to care about, unless they are connected to real events or current news. One issue that I have always wanted to write about is the potential for a feedback loop between price and value (I can see you already rolling your eyes, and getting ready to move on..), but with the frenzy around GameStop and AMC, you may find it interesting. Specifically, a key question that many investors, traders and interested observers have been asking is whether a company, whose stock price and business is beleaguered, can take advantage of a soaring stock price to not just pull itself out of trouble, but make itself a more valuable firm. In other words, can there be a feedback loop, where increasing stock prices can pull value up, and conversely, could decreasing prices push value down?

Price, Value and the Gap

For the third time in three posts, I am going to fall back on my divide between value and price. Value, as I have argued is a function of cash flows, growth and risk, reflecting the quality of a company’s business model. Price is determined by demand and supply, where, in addition to, or perhaps even overwhelming, fundamentals, you have mood, momentum and revenge (at least in the case of GameStop) thrown into the mix. Since the two processes are driven by different forces, there is no guarantee that the two will yield the same number for an investment or a company at a point in time:

Put simply, you can have the price be greater than value (over valued), less than value (under valued) or roughly the same (fairly valued). The last scenario is the one where markets are reasonably efficient, and in that scenario, the two processes do not leak into each other. In terms of specifics, when a stock’s value is roughly equal to its price:

I know these implications sound unbelievable, especially since we have been told over and over that these actions have consequences for investors, and so much analysis is built around assessments of accretion and dilution, with the former being viewed as an unalloyed good and latter as bad.
The Feedback Loop
In the real world, there are very few people who believe in absolute market efficiency, with even the strongest proponents of the idea accepting the fact that price can deviate from value for some or many companies. When this happens, and there is a gap between price and value, there is the potential for a feedback loop, where a company’s pricing can affects its value. That loop can be either a virtuous one (where strong pricing for a company can push up its value) or a vicious one (where weak pricing for a company can push down value). There are three levels at which a gap between value and price can feed back into value:
I have summarized all of these effects in the table below: 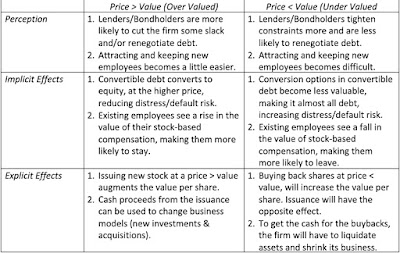 These effects will play out in different inputs into valuation, with the reduction in distress risk showing up in lower costs for debt and failure probabilities, the capacity to hire new and keep existing employees in higher operating margin, the issuance or buyback of shares in cash balances and changes in the parameters of the business model (growth, profitability). Looking at the explicit effect of being able to issue shares in the over valued company or buy back shares in the under valued one, there are limits that constrain their use:
With buybacks, the benefits of buying shares back at below value are much touted, and Warren Buffett made this precept an explicit part of the Berkshire Hathaway buyback program, but buybacks face their own constraints. A large buyback may require a tender offer, with all of the costs and restrictions that come with them, the act of buying back stock may push the price up and beyond value. The value transfer in buybacks, if they occur at below fair value, also benefit existing shareholders, but the losers will be those shareholders who sold their shares back. Finally, a buyback funded with cash that a company could have used on productive investment opportunities is lost value for the company.
Reality Check
With that long lead in, we can address the question that many of those most upbeat about GameStop and AMC were asking last week. Can the largely successful effort, at least so far, in pushing up stock prices actually make GameStop or AMC a more valuable company? The answer is nuanced and it depends on the company:
To incorporate the feedback loop, I had modified my base case GameStop valuation (not the best case that you saw in my last post), and allowed for two additional inputs: new shares issued and an issuance price. Note that the value per share that I get with no additional shares issued is $28.17, and you can see how that value per share changes, for different combinations of issuance share numbers and issuance share prices:

Note that if the issuance occurs at my estimate of intrinsic value of $28.17, the share issuance has no effect on value per share, since the increase in share count offsets the increased cash balance exactly. Even in the more upbeat scenarios, where the company is able to issue new shares at a price above this value, let’s be clear that the game that is playing out is value transfer. To see this, take the most extreme scenario, where GameStop is able to issue 50 million new shares (increasing their share count from 65.1 million to 115.1 million) at a stock price of $200, viable perhaps on Friday (when the stock traded about $300) but not today, the value effect and transfer can be seen below:

The value transfer can be intuitively explained. If new shareholders pay well above value, that increment accrues to existing shareholders. Since the new shareholders are buying the shares voluntarily, you may be at peace with this transfer, but if these new shareholders are small individual investors drawn in by the frenzy, the entire notion of this price run-up being a blow for fairness and justice is undercut.
Investing Endgames!
The anger and sense of unfairness that animated many of those who were on the buying end of GameStop and AMC last week has roots in real grievances, especially among those who came of age in the midst or after the 2008 crisis. I understand that, but investing with the intent of hurting another group, no matter how merited you think that punishment is, has two problems. The first is that markets are fluid, with the winners and losers from an investing episode representing a quickly shifting coalition, The people who are helped and hurt are not always the people that you set out to help or hurt. The second is that if you truly want to punish a group that you think is deserving of punishment, you have to find a way to do damage to their investment models. Hurting some hedge funds, say the short sellers in GameStop, while helping others, like Silver Lake, will only cause investors in these funds to move their money from losing funds to winning funds. Thus, the best revenge you can have on funds is to see investors collectively pull their money out of funds, and that will happen if they under perform as a group.
YouTube Video
Spreadsheet
Blog Posts on GameStop

Capital Performance: Winter 2022 | finnCap Cavendish
Musings on Markets: Data Update 1 for 2022: It is Moneyball Time!
The ABCs of Equipment Financing at CCG