The first quarter of 2021 has been, for the most part, a good time for equity markets, but there have been surprises. The first has been the steep rise in treasury rates in the last twelve weeks, as investors reassess expected economic growth over the rest of the year and worry about inflation. The second has been a shift within equity markets, a “rotation” in Wall Street terms, as the winners from last year underperformed the losers in the first quarter, raising questions about whether this shift is a long term one or just a short term adjustment. The answers are not academic, since they cut to the heart of how stockholders will do over the rest of the year, and whether value investors will finally be able to mount a comeback.

To me the biggest story of markets in 2021 has been the rise of interest rates, especially at the long end of the maturity spectrum. To understand the story and put it in context, I will go back more than a decade to the 2008 crisis, and note how in its aftermath, US treasury rates dropped and stayed low for the next decade.

Coming in 2020, the ten-year T.Bond rate at 1.92% was already close to historic lows. The arrival of the COVID in February 2020, and the ensuing market meltdown, causing treasury rates to plummet across the spectrum, with three-month T.bill rates dropping from 1.5% to close to zero, and the ten-year T.Bond rate declining to close to 0.70%. Those rates stayed low through the rest of 2020, even as equity markets recovered and corporate bond spreads fell back to pre-crisis levels. Coming into 2021, the ten-year T.Bond rate was at 0.93%, and I noted the contradiction in investor assessments for the rest of the year, with the consensus gathered around a strong economic comeback (with earnings growth following), but with rates continuing to stay low. In the first quarter of 2021, we continued to see evidence of economic growth, bolstered by a stimulus package of $1.9 trillion, but it does seem like the treasury bond market is starting to wake up to that recognition as well, as rates have risen strongly: 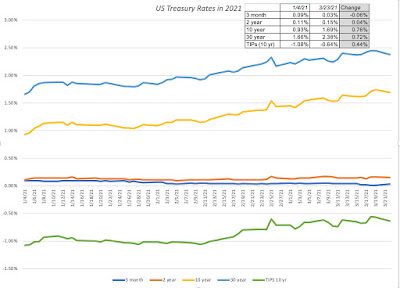 These rising rates have led to some hand wringing about why the Fed is not doing more to keep rates down, mostly from people who seem to have an almost mystical faith in the Fed’s capacity to keep rates wherever it wants them to be. I would argue that the Fed has tried everything it can to keep rates from rising, and the very fact that rates have risen, in spite of this effort, is an indication of the limited power it has to set any of the rates that we care about in investing. To those who use the low interest rates of the last decade as proof of the Fed’s power, I would counter with a graph that I have used many times before to illustrate the fundamental drivers of interest rates (and the Fed is not on that list): 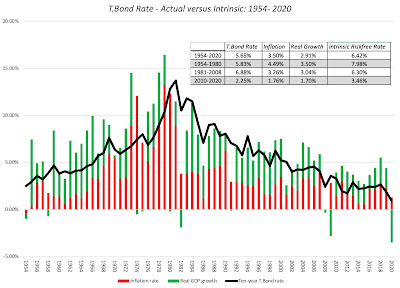 The reason interest rates have been low for the last decade is because inflation has been low and real growth has been anemic. With its bond buying programs and its “keep rates low” talk, the Fed has had influence, but only at the margin.

As for rates for the rest of the year, you may draw comfort from the Fed’s assurances that it will keep rate low, but I don’t. Put bluntly, the only rate that the Fed directly sets is the Fed Funds rate, and while it may send signals to the market with its words and actions, it faces two limits.

In particular, the Fed’s own assessments of real growth of 6.5% for 2021 and inflation of 2.2% for the year are at war with its concurrent promise to keep rates low; after all, adding those numbers up yields a intrinsic risk free rate of 8.7%. While I understand that much of the real growth in 2021 is a bounce back from 2020, even using a 2-3% real growth yields risk free rates that are much, much higher than today’s numbers.

As treasury rates have risen in 2021, equity markets have been surprisingly resilient, with stocks up  during the first three months. However, as with last year, the gains have been uneven with some  groups of stocks doing better than others, with an interesting twist; the winners of last year seem to be lagging this year, and the losers are doing much better. While some of this reversal is to be expected in any market, there are questions about whether it has anything to do with rising rates, as well as whether there may be light at the end of the tunnel for some investor groups who were left out of the market run-up in the last decade.  For much of the last year, I tracked the S&P 500 and the NASDAQ, the first standing in for large cap stocks and the broader market, and the latter proxying for technology and growth stocks, with some very large market companies included in the mix. Continuing that practice, I look at the two indices in 2021: 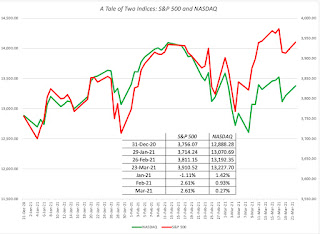 Both indices are up for the year, but they have diverged in their paths. In January, the NASDAQ continued its 2020 success, and the S&P 500 lagged, losing value. In February and March, the tide shifted, and the S&P 500 outperformed the NASDAQ. Looking at the market capitalization of all stocks listed in the United States, and breaking down the market action in 2021, by sector, here is what I see:

The two sectors where there is the biggest divergence between post-crisis performance in 2020 and market returns in 2021 are energy, which has gone from one of the worse performing sectors to the very best and technology, which has made a journey in the other direction. Using price to book ratios as a rough proxy for value versus growth, I looked at returns in the post-crisis period in 2020 and in 2021, to derive the following table:

As interest rates have risen, the discussion in markets has turned ito the effects that these rates will have on stock prices. While the facile answer is that higher rates will cause stock prices to fall, I will argue in this section that not only is the answer more nuanced, and depends, in large part, on why rates are rising in the first place.

As with any discussion about value and the variables that affect it, I find it useful to go back to basics. If you accept the proposition that the value of a business is a function of its expected cash flows (with both the benefits and costs of growth embedded in them) and the risk in these cash flows, we are in agreement on what drives value, even if we disagree about the specifics on how to measure risk and incorporate it into value:

This equation looks abstract, but it has all of the components of a business in it, as you can see in this richer version of the equation: 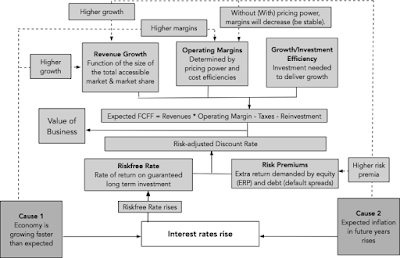 In this richer version, the effect of rising rates can be captured in the components that drive value. The direct effect is obviously through the base rate, i.e. the riskfree rate, on which the discount rate is built, and it is the effect that most analysts latch on to. If you stopped with that effect, rising rates always lead to lower values for equities, since holding all else constant, and raising what you require as a rate of return will translate into lower value today. That misses the indirect effects, and these indirect effects emerge from looking at why rates rose in the first place. Fundamentally, interest rates can rise because investors expectations of inflation go up, or because real economic growth increases, and these macroeconomic fundamentals can affect the other drivers of value:

Put simply, the effect of rising rates on stock prices will depend in large part on the precipitating factors.

To see how changes in interest rates play out in equity markets, I started with a simple, perhaps even simplistic adjustment, where I look at quarterly stock returns and T.Bond rates at the start of each quarter, to examine the linkage.

While the chart itself has too much noise to draw conclusions, the correlations that I have calculated provide more information. The negative correlation between stock returns and rate changes in the prior quarter (-.12 with the treasury bond rate) provide backing for the conventional wisdom that rising rates are more likely to be accompanied by lower stock returns. However, if you break down the reason for rising rates into higher inflation and higher real growth increases, stocks are negatively affected by the former (correlation of -0.078) and positively affected by the latter (correlation of .087). It is also worth noting that none of the correlations are significant enough to represent money making opportunities, since there seems to be much more driving stock returns than just interest rates, inflation and real growth.

I also updated my valuation (from January 2021) of the S&P to reflect current rates and earnings numbers, and played out the effect of changing rates on the intrinsic PE ratio for the index:

Rates and the Corporate Life Cycle

There is a surprisingly complicated relationship between interest rates and stock prices, with higher interest rates sometimes coexisting with higher stock prices and sometimes with lower. As rates rise, though, the effects on value will vary across companies, with some companies being hurt more and others being hurt less, or even helped. To understand why, I will draw on one of my favorite structures, the corporate life cycle, where I argue that most companies go through a process of birth, growth, aging and ultimate decline and death. To see the connection with interest rates, note that there are two dimensions on which companies vary across the life cycle:

Both companies see a decline in PE ratios, as interest rates rise, but the high growth firm sees a bigger drop. This is captured in the growth premium (computed by comparing the PE ratio for the growth firm to the PE ratio for a mature firm). You can check out the effects of introducing malign and benign growth effects into this example, with the former exacerbating the differential effect and the latter reducing it.

I hope that this discussion of the relationship between interest rates and value provides some insight into both why the equity market has been able to maintain its upward trend in the face of rising rates, as well as explain the divergences across growth and mature companies. The primary story driving interest rates, for much of 2021, has been one of economic resurgence, and it does not surprise me that the positives have outweighed the negatives, so far. At the same time, there is concern that inflation might be lurking under the surface, and on days when these worries surface, the market is much more susceptible to melting down. My guess is that this dance will continue for the foreseeable future, but as more real data comes out on both real growth and inflation, one or the other point of view will get vindication. Unlike some in the market, who believe that the Fed has the power to squelch inflation, if it does come back, I am old enough to remember both how stealthy inflation is, as well as how difficult it is for central banks to reassert dominance over inflation, once it emerges as a threat.