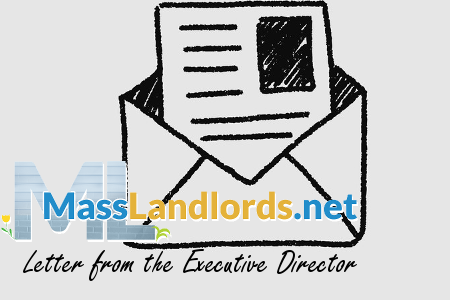 July looks almost frenetic in retrospect, despite MassLandlords reducing our event frequency for the summer. The 192nd legislative session drew to a close, bringing with it a flurry of policy activity. We also were active participants in the payments and water heating industries. Numerous member services were improved.

Massachusetts operates on a two-year session, which at time of writing was scheduled to end in July. This means all bills proposed January 2021 either passed into law or failed. Several newsworthy political events took place.

Chapter 107 of the Session Acts of 2022 permanently extended the requirement to give a state form to a renter during a nonpayment eviction. MassLandlords’ proposal for civil asset forfeiture reform was engrossed by the senate in a floor vote of 31 to 9. We also testified at the Boston Rent Stabilization Advisory Committee owners session. The Boston RSAC will be filing a home rule petition to have local rent control in the 193rd legislative session. We will strongly oppose it.

PayPal announced that they would begin blocking rent payments from renters using the “send money to a friend” option. This effectively mandates the 3% PayPal fee. We have expected this for a long time. RentHelper, a spin-off from MassLandlords that took outside investment, details PayPal’s changes.

Zero-emissions water heating got a boost when we met with Rheem, who, along with A.O. Smith and Bradford White, provides hybrid heat pump water heaters. We shared member feedback about the difficulty of finding plumbers ready to recommend hybrid systems. All plumbers are familiar with gas, but few realize how much better the hybrids are in every respect (cost, emissions, reliability). Rheem outlined several actions they would take, including website upgrades, to make it easier for MassLandlords members to…